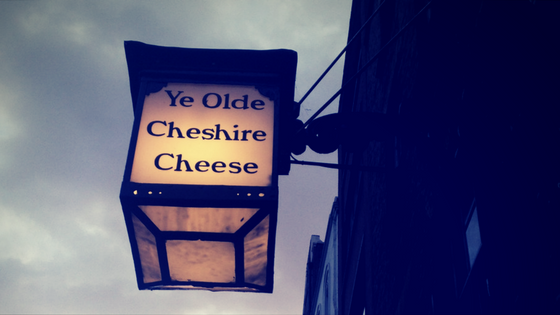 I went on holiday in London earlier this summer and revisited all my favourite British things. I took a selfie in a red phone booth, watched Glastonbury on the BBC with a sleeve of digestives, and spent many hours happily perusing the bookshops of Charing Cross Road.

For most editors, the enthusiasm for language runs even deeper than a desire to shop for first editions: we are never not aware of language and tend to edit the world around us constantly. I enjoyed listening to the conversations on transit—it seems like even working class Brits’ vocabularies are four times the size of the average North American’s—and I took comfort in the way the caution sign at the Tube station presented riders with a few stanzas of Wordsworth along with the stern reminder to carry bottled water so no one keeled over from the oppressive heat on the older lines.

Just as I was relaxing into my bookish break, much to my astonishment, I encountered an egregious error right in the heart of literary London.

I was grabbing a pint one evening at Ye Old Cheshire Cheese, famous as the hangout of Mark Twain, Sir Arthur Conan Doyle, and many other well-known writers. Like a good tourist, I paused to read the sign out front. The second paragraph began, “This Court takes it’s name . . .” Some of you are gasping along with me. There it was in black and white: the contraction “it’s” where should have been the possessive “its”. 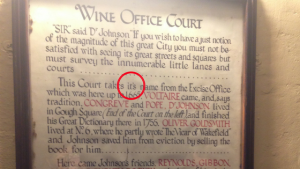 Goodness knows this world is full of errors in spelling, grammar and accepted usage. The difference between their and they’re frustrates many, and just this week a company offered me a “sneak peak” at a new shade of nail polish. (I wished Stealth Mountain was still in operation.) But I expected better from Britain, the birthplace of the English language and centre of several online citizens’ interest groups such as the Apostrophe Protection Society.

I am not one to wail about how “standards are slipping” although they are and it frightens me sometimes (see this column); most often I choose to chuckle at people’s punctuation challenges and console myself with the thought that at least there’s still a widespread need to hire an editor.

While I take a compassionate view of the grammatically challenged, as an editor I am exacting. At LifeTree Media, most of the work I do with authors is developmental and substantive editing, at least at first, so I overlook grammar errors on purpose in favour of ensuring logic, argument, voice, and heart are well developed. When our clients get to the later stages of the editorial process with me and I switch into “copy editor mode” they’re often shocked (and I hope delighted) as the page fills with red marks. The Grammar Police have arrived and Michelle is Detective Chief Inspector.

As soon as I saw the error on the sign, I reached for my mobile to tweet a photo of this “grocer’s apostrophe” spotted in the wild, but then paused and reconsidered my impulse to report or fact-check it. “Could I be wrong? Even if I’m right, ‘you don’t make friends with salad’. . . or pedantry.” Fortunately my companion had the same reaction (“This is an offense to the English language.” “Can I get an ‘Amen’?”). My shock validated, I permitted myself to move past the offending object and into the pub, where I calmed my agitation the British way, with a pint of beer.